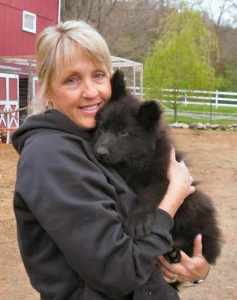 Karen Decker owned dogs all her life, but it wasn’t until 1990 that destiny came to her in the form of a male Rottweiller/Labrador mix named Kelso. Kelso looked a lot like a Labrador but it soon became apparent that he possessed 100% Rottweiler breed traits. 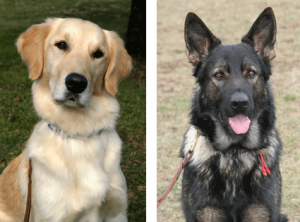 Karen’s Dogs Barley and Radar – RIP – We miss you two!

At six months of age, Kelso was maturing into a very dominant and aggressive dog with a very sharp defense drive who felt biting was the way to handle everything he didn’t want to do. Karen’s options were simple: euthanize him or try to work through this problem. Karen decided to try to work through his problems. It took months of training, but the reformation was incredible. Kelso went on to be a trusted companion, family member and astute guardian for the remaining 11 years of his life.

Shortly after training Kelso, her passion and obsession led her to training full time. All these years later, the obsession and passion are the same, but her knowledge and expertise second to none!

Outside of running PUPS, Karen possesses a deep love of the German Shepherd dog.  In addition, she is passionate about an international sport called IPO aka Schutzhund. Karen feels very fortunate to have trained and mentored under world level trainers/competitors, such as Debbie Zappia!  Deb Zappia won the 2015 WUSV in Finland (first American to ever win and second woman to ever win!). Debbie has represented the U.S. on the World Team many times before in addition to winning and placing in many championship competitions.

Karen is currently training her two GSDs for IPO.   Beda Van Den Heuvel has earned his BH and his IPO 1, IPO 2 and IPO 3 as of 2016.   Venom Vom Diamond is in training to compete in IPO.   In addition, Karen has a beautiful Golden Retriever named Lycinan’s Dusty Rose – her official title is “Occupation Family Dog” at which she excels!   Since Karen and her “boys” are out training all the time, Dusty efficiently holds down the fort and intuitively knows who needs attention and when.  Although she is capable of doing many things, she’s the heartbeat of the home! 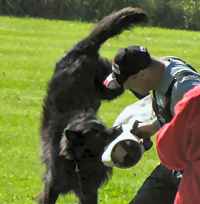 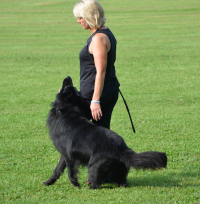 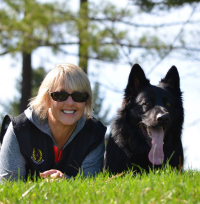 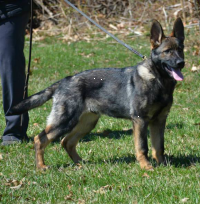 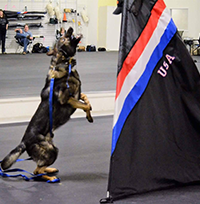 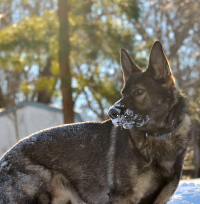 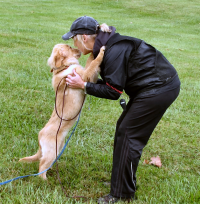 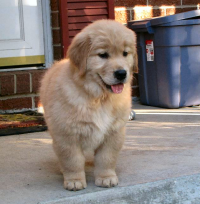 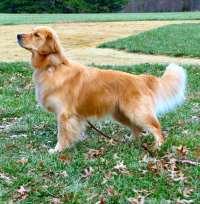 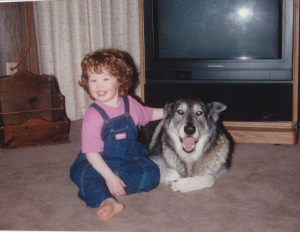 Kristin and her canine bff, Sasha, the kindest soul one could ever know – RIP

Although Kristin Clark is relatively young, she packs a ton of experience into that youth!  Kristin is Karen Decker’s daughter and ever since she can remember, there have been dogs in her life and a leash in her hand.  Kristin’s first BFF was four legged.  She grew up with guardian breeds and bully breeds and was taught at a young age how to respect dogs and how to interact with them appropriately.  As a result, she grew up with a natural passion for all dogs and an interest in training.   She was very hands on with the family dogs growing up and you could often find her in the back yard with her American Bulldog, Chaos, teaching her to jump over jumps, or walking Kelso, the Rottweiler mix who was the inspiration behind PUPS, around the block.  Even as a toddler, she would sit on the floor and hold court with her dolls and Sasha or Cody, the very first family dogs in Kristin’s life. 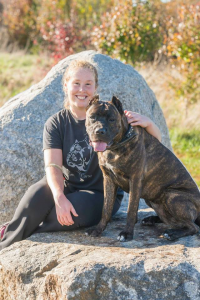 In approximately 2009, while assisting with a class, she met a shy, fearful, yet gorgeous Cane Corso named Nero.   It was love at first sight!  Not only did Kristin fall for him, but he immediately took to her which was unusual for the breed especially one that was shy and fearful.  Their wonderful relationship sparked in Kristin a huge passion for Cane Corsos.  Kristin went on to get her own Corso in 2012.   A beautiful little dark brindle girl she named Grand’s Cianna.  At only two, Kristin had accomplished so much with her already!  Kristin trains and competes with Cianna in IPO (Schutzhund) and has been fortunate to be able to train under her mentor and beloved friend, Debbie Zappia. Cianna earned her BH in 2014 and in 2015 earned her IPO I, then went on to earn her IPO 2 with the help of Beth Bradley at that time.    Kristin and Cianna continue to train, but in PSA and they are both enjoying it!    In addition to IPO, Cianna has earned her CGC, World Cynosport Rally I, Cynosport Rally 1 Award of Excellence titles and her Rally II title!   She will be continuing in Rally as well!   Cianna also participates in Dock Diving and possesses a crazy love of the water!   In addition to all the areas of training in which Cianna excels, Kristin has made it a full time job to socialize Cianna from the time she was a pup to the present and it will continue.   As a result, Cianna makes friends everywhere she goes!   She is great with people and with other dogs and is quite popular in our area!  Kristin and Cianna not only represent PUPS in a favorable light wherever they go, but, they also represent the Cane Corso in a favorable light as well! Kristin will soon have an additional Corso pup to work in Sport and follow in Cianna’s footsteps!     You can follow Kristin and Cianna on our Facebook page! 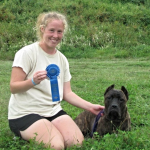 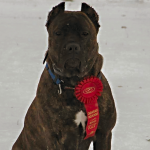 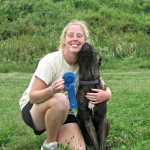 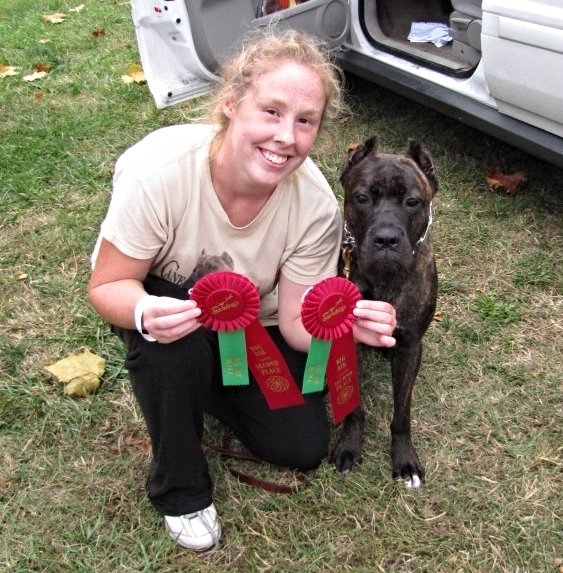 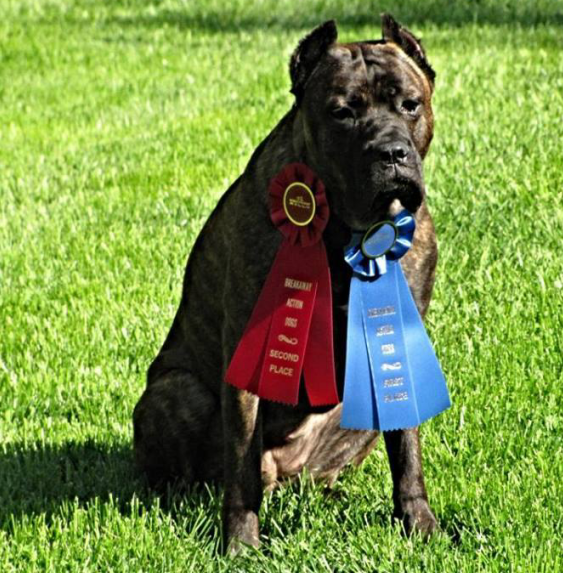 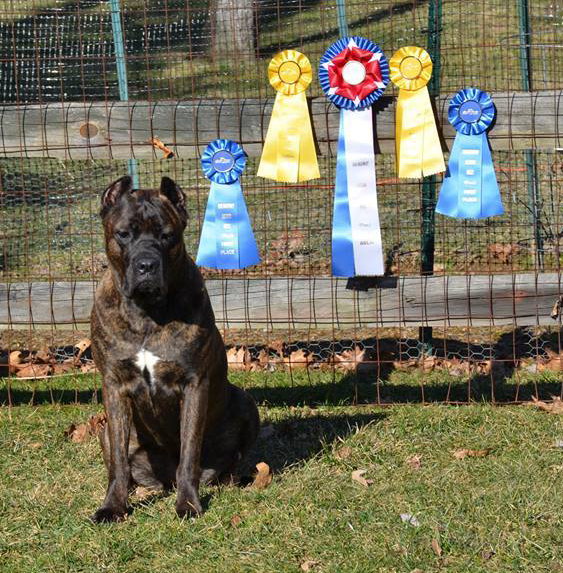