Gilbert, our 9-1/2-year-old Jack Russell Terrier/dachshund mix who attacks other dogs, completed your class last month. My husband Dave and I decided to take Gilbert on a walk down Main Street, Ellicott City recently, something that took every bit of courage I could muster, given his uncontrollable behavior problems around other dogs. He walked perfectly on the leash — I eventually put him in heel, but then — yikes — soon I spotted another dog. He looked at it, reacted a little, but stopped as soon as I corrected him. I’ve never seen him respond like that before, but I thought that because the dog was walking away from us, maybe it was a little easier for him to control himself. I stayed with Gilbert outside of a store while Dave went inside to exchange something — I think he was gone about 15 minutes, and Gilbert sat the ENTIRE time on a loose leash, despite all of the people walking by. I was one proud dog-owner — a big change from being so embarrassed about his behavior that we’ve sought out isolated areas to walk him! When Dave returned, we continued walking up Main Street on heel because it was so crowded. Then, I saw it: at the top of the hill, two huge dogs taking up the whole sidewalk. I couldn’t cross the street there — we had no choice but to walk past those dogs. I thought, well, at least most of the walk was pleasant. As we approached the dogs, Gilbert started that heavy breathing he does before losing his mind, and I corrected him. We walked past those dogs. We didn’t hop and growl and bark and shriek and try to fight past those dogs. We WALKED past those dogs. That is the first time since he was a puppy we’ve felt in control of him. This is the reason I was so glad to find your class after searching for a solution for almost nine years! When we started class with you, Bristol, was a liability issue. I couldn’t trust her with other dogs in any situation, her ground manners for all intents and purposes were all over the place … and now? I can’t believe this is the same dog. She responds beautifully on leash, she’s becoming more consistent with voice commands and the biggest thrill: she has normal responses to dogs now – tail wagging as opposed to face chomping. At this point in the game, I don’t worry about her anymore … and that’s huge! 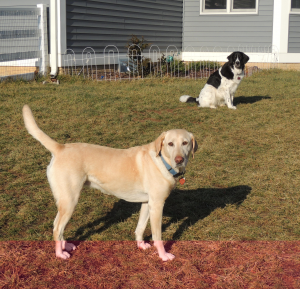 I want you all to know that this has been an unbelievable experience for us.  I don’t think we ever thought that we would be able to get Carrie to pay attention to anything or anyone but the other dogs in the class.  But you guys did it.  And the special attention you gave to us because of Bill’s hearing loss was worth more than gold.  The fact that you treated each individual and each dog as needed is an incredible accomplishment.

Bill and I enjoyed the classes very much – as did Carrie – and we are thrilled that we can come back and join in classes whenever we are ready to do so.

So – see you soon and thanks again! We’d adopted Oliver from a shelter and he’d been showing increasing aggression, culminating in biting two different strangers. We weren’t sure if we could keep him – we wondered if the right thing to do was put him down. Your classes saved his life – and changed ours. Despite his fear of strangers, he is the gentlest, kindest, oldest soul in the world. So thank you, thank you for showing us a different way.

The Smiths and Oliver A few months ago I adopted Bear, a dog who weighs over half my weight, had an outrageous prey drive, was wary of strangers and had just become very dog aggressive, even from a good distance away. I had never had an aggressive dog and became terrified to walk him outside for fear he’d start lunging, spinning, growling, etc., and I had no idea what to do and wasn’t sure I could control him. My type A personality made me beyond self conscious that I had the “crazy dog” in the neighborhood…so I didn’t think Bear and I were meant to be. I tried working with a trainer who used food techniques and that was no match against a squirrel or approaching strangers or dogs. Inside, though, he was the most lovable dog! After a few months, I was at my wits end with this seemingly bi-polar behavior. My brother has a high energy pit bull that had gone through PUPS with Karen and they were doing amazing things on and off leash after only 8 months, so I promised myself and Bear that I owed him another shot. By the time the first class came around I was one big ball of frustration and emotions ran high as Bear kept barking and displaying aggression towards other dogs. Then Sue walked me through the heeling exercise and we’ve never looked back. Sue also stayed late to discuss and better understand Bear’s triggers so she could give me the right advice. Sue and Karen give you the right tools you need to be successful and Sue spent so much time with me after class working with techniques I could use to help Bear focus on me. After the first class she said training was going to be fun…I was in tears and it was only the first class, how could this ever be fun?? But you know what’s fun? Watching your dog grow and succeed and get better by the day. She was absolutely right. Sue made me see how great Bear could be and I know now that he will be the dog I always wanted, we just have a bit of work to do. The PUPS technique has made Bear more confident in me and just as importantly, made me more confident in me. He’s far calmer and seems much happier than when I first got him. Infinite thanks to Sue for adopting Bear and I, and getting us on the right path and showing me step by step what to do when we come across another dog or person. While Bear is still cautious around strangers, he is much more trustful of me and after only a few weeks can now tolerate some dogs at a safe distance. We have a ways to go, but my confidence is so much higher and I know Bear and I can get there with more practice. While I’m still pretty sure Sue likes Bear more than me (ha!), it’s okay by me because he’s becoming such an awesome companion. Love you guys! Thanks for everything! You helped me and my dog Cassie. Cassie had killed my cat and was on “death row” herself. You were a great comfort to me and even allowed us to take your class at no cost.While we didn’t finish the entire course, a corner was turned.With much more understanding, I’ve been able to work with Cassie and today she is a healthy, sweet, much loved wannabe lap dog. Teddy the chow mix was getting to be a little scary with aggression issues before this training. I am happy to report, he was the center of attention when we had company over the holidays. No constant barking or nipping! I also was able to take him to Centennial Park and after he settled down, he was able to walk beside me, despite the other dogs!

Thank you Pups Dog Obedience! I sought the help of a trainer for my 5 year old Rottweiler, Beau, because over time he developed aggressive behavior towards other dogs and children. I was at my wits end with how to help him get over this behavior. I wanted to find a trainer that knew about my specific problems and would provide me with solutions rather than just teaching my dog to sit and stay. Karen’s methods have helped Beau with his confidence, and trust in me as his handler. During our time in the class Beau became more comfortable around the other dogs and people. He surprised me sometimes with how well he did even when I was nervous about an exercise. I was very impressed with Karen and her dedication to helping myself, and others in the class with their dogs. She clearly knows what she is talking about! Even in aclass of more than 20 people and dogs she gave myself and others special attention to help with specific needs. Karen truly cares about the well being of all the dogs in her classes and will not let someone walk away without results. Whether it takes 7 weeks or 7 months! Thank you Karen for your sincerity, attention, and expertise! I look forward to working with you more!!